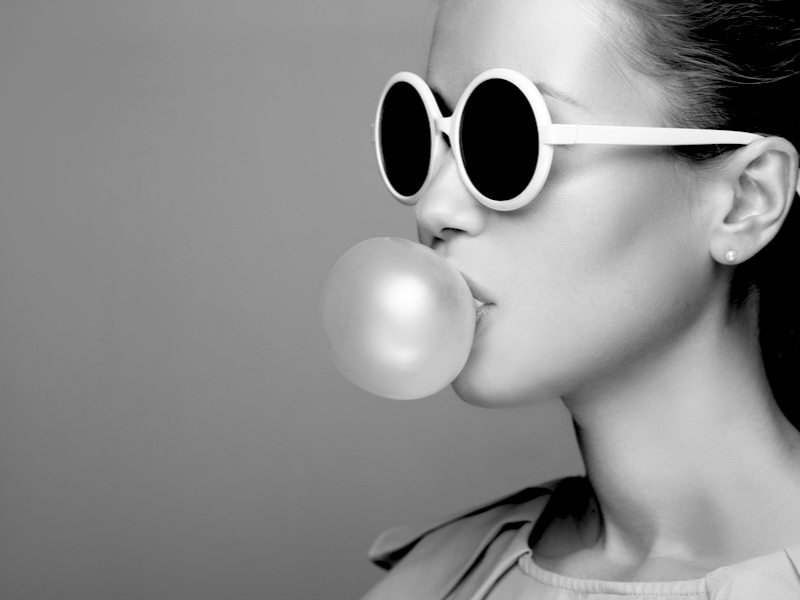 I wonder if anyone has quantified the “Robinhood Effect”. Robinhood, as you may know, is a popular trading app that disrupted the online brokerage industry by offering $0 commissions on stock trades. This was huge. It made trading accessible to people with smaller sums of “play-money”. Consider this: Someone with $2,000 in play-money has just about $200 to spend on each stock on average – that is, if we assume he or she wants at least 10 stocks to diversify. Online brokerage firms used to charge $5-7 per trade. That’s 2.5%-3.5% of commission per trade for our friend. That’s a lot of money to the croupier.

Robinhood changed all that. But I wonder if it has a big effect on the market. Stocks of companies that are expected to grow at a fast and furious pace have shot through the roof. Tesla is obviously the posterchild of this phenomenon. I call it the “trader-bro” phenomenon. It’s all about the thesis: “I love the product, therefor I buy the stock; valuation shmaluation be damned!”

It looks and feels like the dot-com bubble of the 90s, when companies that made huge losses were trading at ridiculously high prices. We know how that movie ended. But hang on; there were a few hyped-up names from that era that actually made good on their promise. Amazon is the prime example (pun intended, sorry). It’s possible that there is some merit to this “trader-bro” thesis. Maybe 1 out of every 10 trader-bro stocks will go the Amazon way, and that’s good enough. It’s a Venture Capital approach to Public Equities, albeit with a much simpler “analysis”.

At The Buylyst, we believe in cash flows and valuation. We can’t shake off “old-school” principles such as “thou shall invest in profitable companies”. We spend a lot of time trying to estimate FUTURE cash flows or FUTURE profitability; we are less concerned with current cash flow. This has been an evolution in our process over the last couple of years. Why did we make a slight shift in our approach? Because most of our investment themes are in their nascent stages – like AI or Fintech. We don’t dismiss companies that are unprofitable today but show good promise of profitability in the near future. When I say, “good promise”, I mean a combination of Amount and Probability.

Probability is important. We need to be reasonably sure of future profitability. Obviously, this is a subjective call, so we can never be 100% sure. But if we can break down the company into its elements – like Price and Volume of goods sold – we can make educated assumptions. Now, we tend to do this type of prognostication for companies that dominate their field – what we call Global Dominators. We did it with Spotify. We did it with ASML. We did it with TSMC. For these Global Dominators, we ask ourselves, “what do we need to believe about future revenue growth to buy into this company today?”

Now, in this analysis we won’t break the companies down into price and volume of products. But we will go fairly deep in trying to answer the same question, asked in two parts:

We’ve put together about 26 stocks, most of which we would classify as “trader-bro”. We’ve also added a few of our holdings – mostly for context but also to do a sanity check on them.

Here’s how some of these trader-bro names have done over the last 3 years: 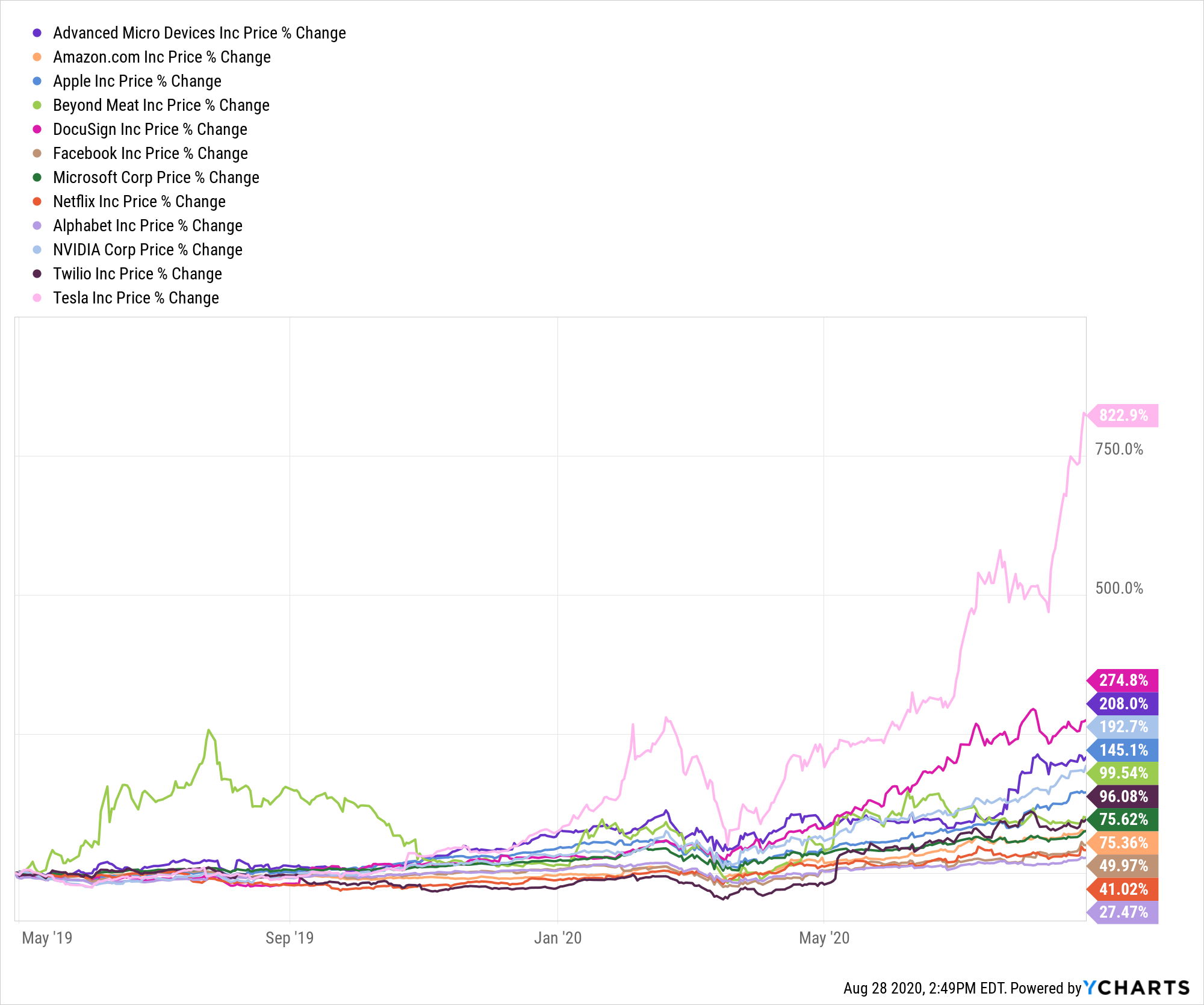 Wish this was your portfolio over the last few years? Don’t we all? But let me assuage your regret. In hindsight, it’s all rosy. But if you’re investing in a company without a reasonable amount of insight into how they will be profitable, you’re gambling. Gambling is risky. But even gambles pay off occasionally. “I love the product, therefore I love the stock” is a gamble. “I love the product and can clearly see a path to profitability, therefore I love the stock” is investing. In the former case, you’ve got to be honest with yourself: you’re really betting on other people liking the stock as much as you do. That is speculation.

Here’s Uncle Warren on the topic of Investing vs. Speculation:

We’re not saying that all trader-bro stocks are speculative. But many are, and to distinguish a blind gamble from a sensible bet takes some work. That’s why we work so hard.

Let me assuage any feelings of FOMO with one last insight from Uncle Warren (I’m paraphrasing): An error of Omission is better than an error of Commission. With the former, at least you don’t lose money.

Having said that, let’s try and estimate what we need to believe about these trader-bro stocks for us to pull the trigger. Should we commit?

Let’s jump right into it. Here are our estimates of Revenue Growth that we need to believe about our Trader Bro portfolio:

The chart looks simple but it took a little bit of digging in – we made some assumptions about the future cost structures of these companies. But that’s a boring discussion, so I’ve left it for the last section. Feel free to dig in. Insights are more interesting.

You may use this chart however you wish but we’re using it for:

Here are our top insights:

Tesla has been a trader-bro favorite. I think there is some merit to the trader-bro thesis that they can dominate the EV market. Now, the last time I did some work on Tesla, it still looked too expensive. But I don’t regret not buying it – it’s not as if Tesla is selling a lot more cars suddenly. Their trailing 12-month revenue ending June 30th, 2020, barely increased from the same time last year – from $24.9 billion to $25.7 billion. Granted, there’s a pandemic. But if you look at the stock chart, you wouldn’t think so. As I did last time, I would break Tesla down into Price and Volume in order to estimate future profitability. Our estimate today suggest that we need to factor in a 11X growth in revenue for us to buy in. But to believe that number, we’ll need to assume:

But maybe Tesla doesn’t need 20-30% market share in order to grow revenue by 11X. We should dig in. Funnily enough, while the chart above screams “stay away from Tesla”, our curiosity has outmaneuvered our better senses.

But before Tesla, we’ll dig into the following:

As promised, we’ll delineate how we arrive at our “Believe” chart. You’ll find the raw data below, in case you want some light reading. :)

Here’s what we did:

We believe our assumptions are reasonable. Here is a table with all our data:

We hope this exercise was useful to you while you wrestle with your feelings of FOMO. We all have it. But if history is any guide, FOMO can result in huge losses. Some of the brightest minds have suffered its consequences. In the 1700s, Sir Isaac Newton bought into the South Sea Bubble because of FOMO, and lost a massive amount of money. He concluded:

“I can calculate the movement of stars but not the madness of men!”